Medicalisation of death and dying : systems, practices and politics 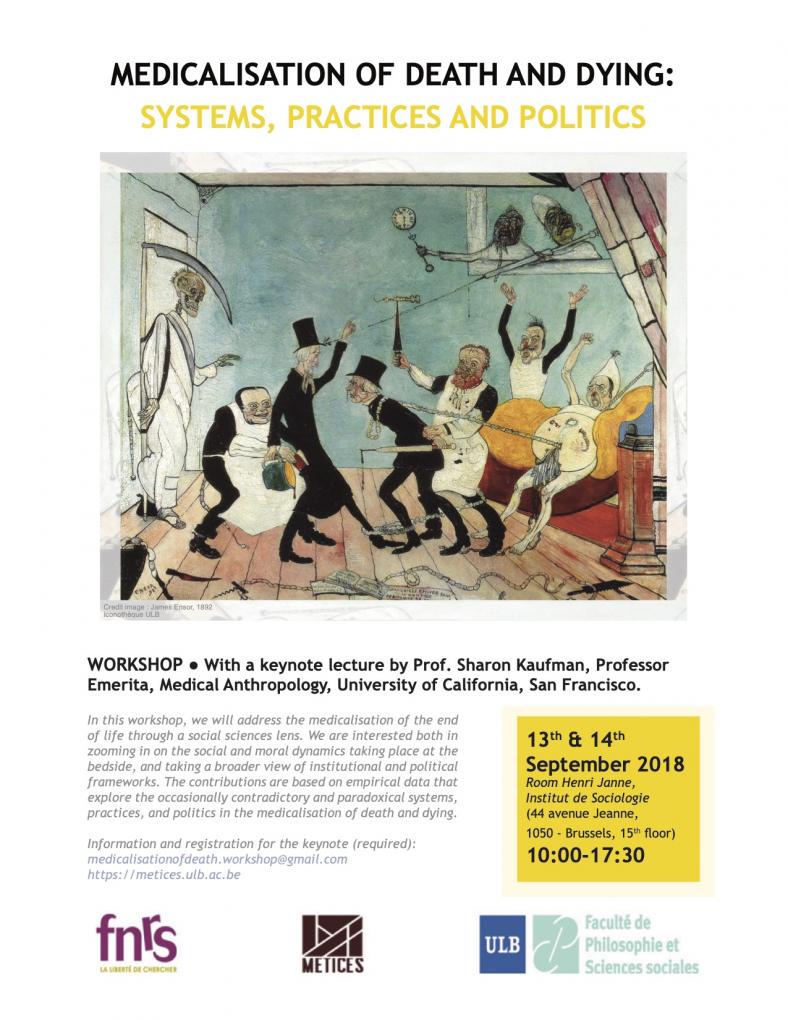 You will find here he call for papers of the workshop “Medicalisation of death and dying : systems, practices and politics” that will be held at the Université libre de Bruxelles (Institut de Sociologie, Salle Henri Janne), on 13 and 14 September 2018.

To foster collective discussion, Prof Sharon R. Kaufman (Professor Emerita, Medical Anthropology and Chair of the Department of Anthropology, History and Social Medicine at the University of California, San Francisco) will give a keynote lecture during this workshop.

Modern demographics have deeply transformed attitudes and social relations in the organisation of death and dying, in particular in terms of end of life care services for a growing number of elderly people, decision-making and the creation of new rituals (Walter, 1994). These changes have takenplace in a medical context of continuous development of life-prolonginginterventions and techniques (Kaufman and Morgan, 2005 ; Kaufman, 2015).

A key feature of these transformations in medicine has been the emergence of palliative care (Clark and Seymour, 1999 ; Kellehear, 1999 ; Castra, 2003). By questioning the way our societies have concealed death and isolated those who are dying (Ariès, 1975 ; Elias, 1979), palliative care proposed new ways to think of end of life care, as well as new organisational models and medical practices, both in terms of managing symptoms and in providing relational support at the end of life. Nowadays, what is the place of palliative care in social, institutional, and political contexts ? For instance, what happens when we explore the differences in palliative care between different institutional settings such as hospital services, nursing homes, or home settings ? Further, there is a need to address how the social and economic circumstances influence the end of life and the provision of care.

In this workshop, we will address the medicalisation of the end of life through a social sciences lens (Illich, 1976). We are interested both in zooming in on the social and moral dynamics taking place at the bedside, and taking a broader view of institutional and political frameworks. We invite contributions based on empirical data that explore the occasionally contradictory and paradoxical systems, practices, and politics in the medicalisation of death and dying.

Contributions may address, but are not limited to :
• The impact of healthcare systems and economic constraints on the end of life (Welfare State models, market-oriented health care reforms, policy and institutional changes).
• Healthcare practices relating to death and dying (new frontiers in curative treatment and palliative care, personalisation of treatment, legal instruments and decision making, grief and bereavement support, mortuary practices).
• Moral and political dynamics of death and dying (issues regarding citizenship and personhood, dignity, quality of life, access to healthcare).

To foster collective discussion, Prof Sharon R. Kaufman (Professor Emerita, Medical Anthropology and Chair of the Department of Anthropology, History and Social Medicine at the University of California, San Francisco) will give a keynote lecture during this workshop. She is the author of several publications on medicine and the end of life, in particular : *And a Time to Die : How American Hospitals Shape the End of Life*, University of Chicago Press (2005) and *Ordinary Medicine : Extraordinary Treatments, Longer Lives, and Where to Draw the Line*, Duke University Press (2015). Her ethnographic works highlight the forms of social negotiations in medical treatment at the end of life, addressing the question of the state’s relation to the regulation of death in the context of the American healthcare system.

Try the free CSS tidy up which lets you beautify stylesheets for your websites.